Oudi came to us from Sherry Larsen in Clovis, California. He has a truly effervescent personality--for Oudi every day is a great day and his enthusiasm for life is infectious. His name, which is pronounced "out-ee", is for the famous escape artist Harry Houdini (hOUDIni). On his first day with us Oudi managed to escape his x-pen, crate and climb over two baby gates. It took us awhile to decide on a name for him, but "Under Lock and Key" seems to suit him perfectly. Oudi went to summer camp with Ed Tillson of Tequila Kennels in the summer of 2013 and, fortunately for us, Ed had the patience and the expertise to recognize Oudi's potential. With Ed, Oudi picked up multiple derby placements and after a respite at home to finish his show title, Oudi came on strong in adult stakes in 2016. He kicked off the fall with multiple adult ﻿placements ﻿in big, competitive stakes. He finished his DC title with a 2nd place in the Grand Open Limited Gun Dog Stake at the Iowa Brittany Club in 2017. Since then Oudi has become a strong contender in the Midwest field trial circuit. He won the ABC Gun Dog Classic in May of 2018 and completed the year by winning the 2018 Garmin Award, which recognizes the top Brittany shooting dog in the country! Oudi is just coming into his own and we look forward to more great things to come!

In the show ring Oudi won Best Puppy at his first show which happened to be the Iowa Brittany Club Specialty. He finished his show championship in June of 2014 in twelve shows with three majors. 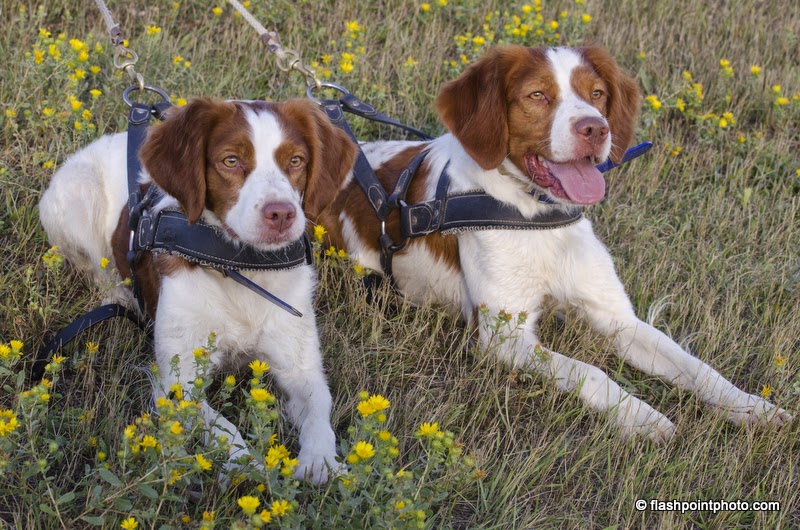 Oudi on the right with his littermate, Tessa (GCh. Almaden's Masked Shadow Dancer) on the left. Brother and sister hanging out in the roading harness.